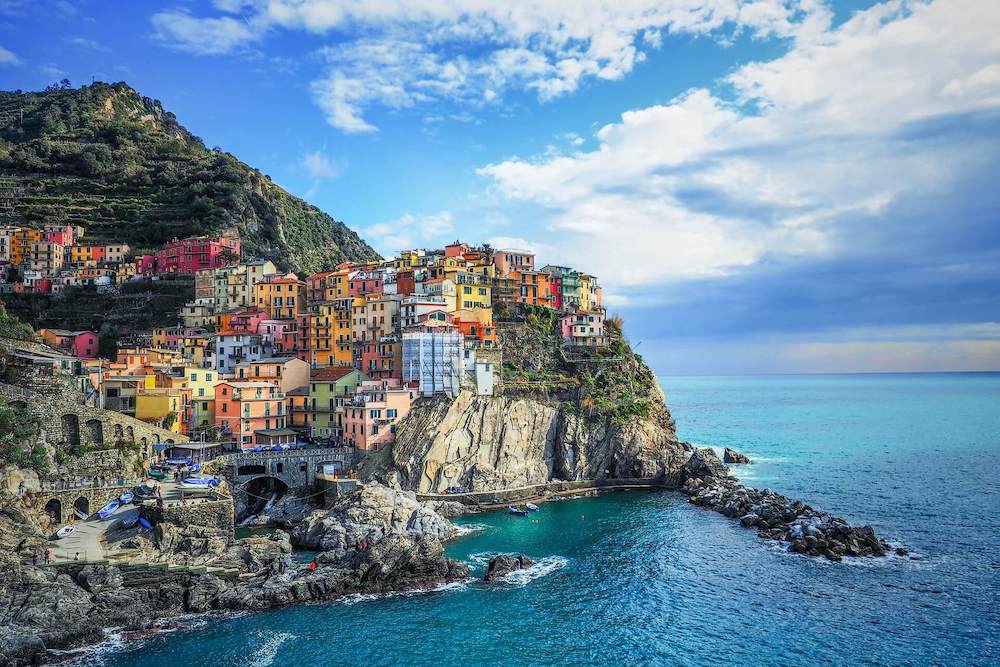 Milan is one of the most unique cities in the world. It is home to Leonardo’s Da Vinci’s arguably the most famous work “The Last Supper”. Milan itself is one of four fashion capitals in the world, and it’s also home to numerous beautiful restaurants, shopping centers and gorgeous historical buildings.

Also, Milan is a perfect spot to explore the north of the Italian Boot (which is similar to the geographical shape of the country).

Whatever direction you choose, you will stumble across adorable little towns clustered around Milan. I suggest these 13 easily reachable locations that will make your experience in Italy even more unforgettable.

Lake Como might be the most famous and gorgeous lake in Europe. Its azure, crystal clear water, colorful shoreline, and surrounding preAlps make it a must-see destination. It takes about an hour to get here, and if you arrive early, you’ll have enough time to visit several towns along the shore.

The first town is Como, the very southern point on the map. The 11th-century Basilica of Sant’Abbondio and the Roman gate are two main historical sights. The best souvenir you could bring from Como is a silk scarf or tie as the town used to be a major center of silk production.

Bellagio is another beautiful town, which terrains the peninsula’s tip and divides Lake Como in two parts. You can reach Bellagio by boat as well as other tiny towns (such as Varenna). Do not hesitate to hop on a ferry and explore the beautiful coast of Lake Como!

How to get to Lake Como from Milan:

Tip There are some shorter train routes, but I recommend heading to Varenna train station as it’s a good starting point for your exploration, and you can ride a ferry from there.

An Italian “city on water,” Venice is a world wonder itself. Its houses are inclined toward the canals, and local boats, called gondolas, carry hundreds of tourists daily.

Venice is as impressive as Rome and Milan and it takes only 2 hours by train to get there. You should definitely take a gondola to perceive a full image of the city, feed pigeons on St. Mark’s Square, and take a photo of the Bridge of Sighs. Don’t forget to buy Venetian glass if you are fond of extraordinary tableware.

It is a relatively small city, so Venice is an excellent location for a day trip from Milan.

How to get to Venice from Milan:

Pavia used to be a strategic military town during the times of Roman Empire. Nowadays it’s mostly known for one of the best universities in Italy, the University of Pavia.

If you like medieval esthetics with old towers, 14th-century bridges, and Renaissance buildings, you will adore Pavia. Make sure to visit Catholic churches such as San Teodoro, Santa Maria di Canepanova, and San Michele Maggiore.

For those who got a little tired of Italian wines, Pavia will open fantastic craft beers for you.

That’s one of the closest Milan locations, so it only takes half an hour to get to Pavia for a price of coffee – don’t miss this opportunity!

How to get to Pavia from Milan:

Italy’s fabulous five, or Cinque Terre, is a complex of five tiny villages south of Milan. Tourists do not expect to see major museums or castles here – it is more about the picturesque nature and the ambience.

Once you come to Monterosso, step on the walking trail through the steep cliffs to get to the other four spots: Riomaggiore, Manarola, Corniglia, and Vernazza. If you are short on time, stop by a local restaurant, grab some fresh focaccia, and take a boat or train to catch all the unforgettable views!

How to get to Cinque Terre from Milan:

Another great city for a weekend trip is enchanting Florence. This city will leave you in awe whether you spend a day or more. Technically, you need 6-8 hours to explore all the main sights.

You will not mistake the Cathedral of Santa Maria del Fiore due to its masonry dome, considered the biggest in the world. Michelangelo admirers will love the marble tomb of Giuliano de Medici by Michelangelo, set in Medici Chapel. It is well-preserved and has not lost its monumentality for over five hundred years. Once you arrive at Piazza della Signoria, buy ice cream at the local gelateria and observe the magnificent Fountain of Neptune.

How to get to Florence from Milan:

Which city is associated chiefly with Romeo and Juliette by Shakespeare? No doubt, it’s Verona, a wonderful town with blended architecture and considerable cultural heritage.

One of the world’s oldest Roman arenas built in the 2nd century AD is situated next to the majestic garden called Giardini Vittorio Emanuele II. A few blocks away, you will find a Castelvecchio fortress that serves as a museum with Romanesque and Gothic sculptures, paintings, medieval artworks, weapons, and jewels.

However, nothing attracts as many tourists as Juliet’s balcony. And if you are obsessed with gorgeous Italian lakes, stop at Lake Garda between Milan and Verona.

How to get to Verona from Milan:

Bergamo is a considerably small city located northeast of Milan, a real gem of Italian architecture as the oldest churches, towers, and chapels reside here.

Tip Head to the upper old town called Citta Alta, sprinkled with historical sights. You can get there by a funicular stopping you at Piazza Mercato delle Scarpe, your starting point.

Walk down the stone-paved streets toward a real architectural wonder, Santa Maria Maggiore. The basilica integrates different styles: its entrance is Gothic, the interior decorations represent Renaissance, and some elements date back to the Baroque era.

Try not to get overwhelmed by the abundance of architectural wonders!

How to get to Bergamo from Milan:

Italy is famed for its architecture, wine, and, for sure, outstanding cuisine. If you are looking for a unique gastronomic experience, you must visit Bologna. The so-called “fat city” indulges tourists with traditional tagliatelle al ragù, pasta with ragu sauce made of minced beef, tortellini in brodo, rounded-shaped pasta with pork and parmigiano reggiano served with broth, and mortadella, a pork sausage. There are dozens of spots for vegetarians also.

Bologna is also the historical center of higher European education as the first university in Europe was built here in 1088. So, don’t forget to explore the University of Bologna and other sights, such as the Basilica of San Petronio and Piazza Maggiore.

How to get to Bologna from Milan:

For those who got tired of Milan’s pace of life and crowds, we recommend embarking on a journey to countryside-like Varese, full of multiple gardens and preserved parks. It is famous for Sacro Monte di Varese, one of the nine sacri monti (old chapel ensembles with authentic frescoes and sculptures) in Italy included in the UNESCO list of World Heritage sites.

Above Varese, an adorable village is climbing the steep hill, such an instagrammable view! Art Nouveau streets and 18th-century villas, including the notable Villa Panza Biumo, spread around the city. End your day trip by taking a seat at one of the top restaurants!

How to get to Varese from Milan:

Lake Maggiore is another magnificent lake in Italy worth seeing. This natural wonder speaks for itself, so don’t expect active facilities here – relax and appreciate the view.

The lake hides three tiny islands: Isola Madre, Isola Superiore, and Isola Bella. You can readily stop by all of them taking a ferry at Stresa. The whole territory of Isola Bella is occupied by the palace of Count Vitaliano Borromeo and the sumptuous gardens. Isola Madre boasts the Palazzo Borromeo and no less impressive parks, and on Isola Superiore, you can try some lake fish at the local restaurant.

How to get to Lake Maggiore from Milan:

Turin, or Paris of the South, really reminds the capital of France. When strolling around the lanes and wide streets, you will barely get lost, thanks to the excellent arrangement of the town. Owing to the proximity to the Alps, tourists have a chance to take an elevator at Mole Antonelliana and see the breathtaking views of the mountain chain.

Turin is also the heart of the House of Savoy (Italian royal dynasty) heritage, so walk toward the Piazza Castello in order to see two glorious palaces. We also strongly recommend checking out Museo Diffuso Torino, a historical museum that retains the memory of people who opposed the Italian fascist regime during WW2.

How to get to Turin from Milan:

This city is, in a sense, a cradle of classical string music. Right here, in Cremona, Andre Amati and Gasparo di Bertolotti invented the first violins, and later, Antonio Stradivari created his legendary instruments. Music lovers from all over the world spend hours in Cremona because there is indeed a lot to discover.

Besides being a musical center from the 16th century, the town boasts striking architecture, for instance, the exquisite Piazza del Comune and Cathedral of Cremona. As for cuisine, the city presents terrific local dish gnocchi vecchia Cremona, which is giant potato pasta stuffed with sausages, yummy!

How to get to Cremona from Milan:

In case you want to take a private boat tour and explore the beautiful marina with sapphire water, head to romantic Camogli.

The city enchants with a relaxed lifestyle, colorful historical buildings, and fine museums. So, I recommend splitting your day trips into two parts.

Firstly, explore the town on foot. Go inside of Basilica of Santa Maria Assunta, visit Maritime Museum, and hike toward the very top to see from above Punta Chiappa, a long rock at the foot of the Portofino mountain.

Secondly, come down, order some pesto pasta with white wine, and hop on the boat to watch the sunset. Camogli is an excellent place for a date with your loved one!

How to get to Camogli from Milan:

Close cities and sights for a day trip from Milan

What is the main train station in Milan?

The central train station in Milan is Milano Centrale, located next to the Piazza Duca d’Aosta, north of the city center. The station provides 24 ways, allowing tourists and locals to travel not only to Italian towns but to Geneva, Paris, Vienna, and other international destinations. The station enchants with the blended architectural style. You will notice some Art Deco elements, gorgeous sculptures and archways.

What is the main bus station in Milan?

The main bus station is Lampugnano near the metro station of the same name. The terminal is clean, super convenient, and provides all the needed information. You can find the full schedule on Autostazioni Milano’s official website.

From my experience, Italy is one of the most diverse countries, and its north especially deserves exploration. Whether you want to discover local cuisine or architecture, walk thousands of steps or relax on the islands next to the Alps, you will find the best experience not far from Milan.

Considering the short distance between Italian cities, you can explore the whole north in a few days. So check the train or bus schedule, grab some snacks, and have a fantastic day trip!